LifeBuilders of the Treasure Coast, Inc.

How We Do It

" LifeBuilders has helped me every step of the way"

I struggled with addiction for over ten years.  In 2013, my alcoholism and addiction had spiraled out of control.  I had destroyed my marriage and the Department of Children and Families had taken my child away and placed him with my mother.  I had some periods of sobriety in my life but I did not have the tools to get back to that sober, happy, well-rounded place.
There came a day I believed that the world would be better off without me.  I was alone and miserable.  I tried not to “use” but I had to keep the withdrawal symptoms at bay.  In 2013 I tried to take my own life, but when I woke up in the ICU, I realized I had not succeeded.  After being released from the hospital I was charged with a DUI.  Everything just kept spiraling out of control when a pastor from Good Samaritan Ministries visited me and told me about his faith-based program that could help me change my life.  I was willing to try anything at that point.
While attending rehab they told me all about LifeBuilders.  I did not have a dollar to my name and needed rent assistance.  If I could just get help in paying my rent I could get over the financial hump so I could focus on myself and getting sober.  I nervously called the application line and the volunteer was so nice, so wonderful and so supportive.  And, she did not make me feel less about myself because I needed help.
My application for rental assistance was approved and I was reassured that LifeBuilders would always be there to help me as long as I was helping myself.  I cannot express at that moment how much it meant to me and I signed a Pay it Forward agreement to try and help others in the same circumstance in the future, if I were able.
Today, I have had custody of my son for over two years, my marriage is restored and I have an absolute dream job!  I am the National Judicial Liaison for The Shores Treatment and Recovery and am also on the Mental Health Court panel for St. Lucie County. I also volunteer at Good Samaritan Ministries.   I am so grateful for LifeBuilders and what they did to help me become successful and shape the person I am today.  LifeBuilders has helped me every step of the way in my journey toward recovery, being a mother and being a respected member of society.

Five and a half years ago I was arrested for my third DUI.  Having been in jail many times, I existed in denial of my alcoholism and continued the pattern of being arrested.  During my last incarceration I learned of a program called Re-entry.  This program met one day a week for one hour.  In this program I began to understand the state of denial I had been living in for years.  I attended this program for 8 months.  During this time, I had an awakening of many things.  I began to realize how the Re-entry Program offered a new approach to living.  I understood finally the way to my healing meant I had to surrender my way.  Currently, I have been clean and sober for 5 ½ years.  I am now employed as a peer support specialist.  I hold classes in the dorms I once did time in.  I continue to live with the knowledge that I have learned from this program.  Simply put, “Living life on life's terms.”  “This program saved my life, and I would be honored to give something back to it.” KB

Update: In 2013 Lewis is still "Paying it Forward" everyday!
When Lewis entered St. Lucie County Mental Health Court in October of 2006, he had no desire to change his life, he just thought it was an easy way to get out of his charges. He was resistant to the advice of his case manager and in denial of his mental health and substance abuse issues.  He blamed everyone for his misfortunes and could not take responsibility for the role he played in his own problems.  In July of 2007, after nine months in mental health court,  Lewis was sentenced on his charge. Lewis had  failed out of Mental Health Court.
In January 2008, once again Lewis found himself  in trouble with the law.  This was not a new situation for Lewis;  he'd had over ten minor offenses in the past five years.  He knew he could do a few months in jail and then, once again, be able to live life as he wanted. However, this time Lewis decided what he really wanted was a better life.  Lewis asked his attorney if Mental Health Court would allow him to participate again. The first reaction of the Mental Health Court team was, "No".  During his previous interaction with Mental Health Court, Lewis had been  uncooperative and sometimes even unpleasant .  There was, however,  one difference.  This time, for the first time, Lewis was asking for help.  He understood that he was powerless to change his life without the right tools.
When Lewis was accepted into Mental Health Court in January 2008 he made a promise to the court, the team and more importantly, to himself, that he would succeed. He listened to his case manager and moved into a half way house.  He confronted his substance abuse issues and began to understand the effect his bipolar disorder had on his decision making.  He was given the foundation to succeed, but all the hard work of rebuilding his life was done through sheer determination and will.
Lewis did succeed. He graduated from the Mental Health Court in January, 2009.  In April, 2009, he was hired as a Mental Health Court Peer specialist.  He now works arm in arm with the case managers he once rejected.
Lewis states it was during his time in Mental Health Court that he learned to manage the symptoms of his bipolar disorder and the angry outbursts that sometimes got him in trouble with the law. He also learned to overcome his fears of interacting with others in the community and of living alone.  Now, for the first time in his life, he lives in his own apartment.
Like many of the people he helps, Lewis was unemployed, living with relatives and didn't have a car to get to appointments with his doctor or other treatment providers.  He said his illness took a back seat to "just trying to live."
Lewis takes his mentoring of the clients in Mental Health Court seriously.   He has been trained in the WRAP program (Wellness Recovery Action Plan) and leads two groups a week, helping clients understand and cope with their illnesses and develop a wellness plan of their own as a guide to their recovery. 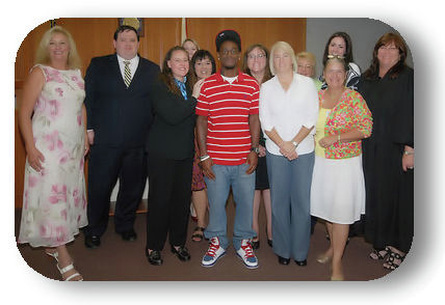